Wake up call was 4am and it was already hot and humid!  Got ready, stopped at wawa and was on my way!  I was super calm and feeling really good about the day.  For the first time ever, I was not nervous at all.  On the ride up, I kept commenting to my mom, that I was actually nervous that I wasn’t nervous. Haha.  We got there right around the planned time, parked and headed into bodymarking.  It was so hot that I had to be bodymarked twice because I was sweating like a freaking man so much and my first set wiped off!  After I was set up in transition it was over to the TT tent to hang out before the race.  Race start was 7:55 but I wasn’t until wave 7 so I had time to hang out. (There were 17 waves!! It is the biggest race in New Jersey!)  At about 8am we all made our way to the swim.

No wetsuits (which was pretty obvious) and even if we could, I would not have worn one because that water was downright hot!  I started to sweat while we treaded waiting for the whistle to go!  I had decided, since the waves were fairly large, to hang back a little.  I knew this would cost me some time but in my opinion it is better than getting kicked in the head.  The decision was a good one because I was able to settle right into a rythym and had a really clear path for most of the swim.  A few girls grazed my foot or arm and one was zig-zaggin really bad in front of me until I was able to get around her but overall it was a good swim.  I felt strong and ran right up the ramp and into T1.

What I would do different:  I might have held back a little too much- better safe than kicked in the face but still…next time I’ll get closer in.  Other than that, nothing…the swim was perfect.  And for the first time ever in a tri, I beat more than half the participants in a category!

Ran in, got my shoes and helmet on and was ready to go.  Then I saw Blake and his Dad David (David and Blake are from NJ; they are a team much like Rick and Dick Hoyt) and just had to run over and tell them how much watching them race together inspired me.

What I would do different:  Nothing.  Spending a minute with David and Blake was worth it!

I had a long run through transition and was so ready to get on the bike by the time I hit the pavement.  I was feeling confident and ready to ride!  The course itself was a bit technical for me, with a lot of turns that kept forcing me to slow down.  One road was potholed and full of gravel which also cost me time.  On the smooth roads I was clocking anywhere from 17-22mph which kept me feeling great about my race, even though I would slow down to about 12-14mph on turns.  I tried not to focus too much on my odometer and just push through, so imagine my surprise when I looked down to see I had only a mile to go!  My goal for the bike was 55 minutes so I was elated when I realized I could be in by 45 minutes.  I gave it my all for that last mile, dismounted and ran into T2.  I was grinning ear to ear and so pumped for the run even though by that time it was friggen ridiculously hot!

What I would do differently:  I have to learn how to work my gears to better benefit my riding…I have trouble getting them set right and I know I lose time fiddling with them.  At times I know if I had my gears in better position I would have been able to go faster with less effort.  But overall, my bike was awesome…15.3 is by far the bext mph average I have ever had and I felt amazing!

What I would do differently: Nothing.

I jetteted out of transition so fast I forgot that I had brought a bottle of water to drink and needed to hydrate.  I drank/walked for about 150 feet and then picked it back up when I saw my mom and Brian waving to me.  (I saw them after each leg- I am so glad that my mom got to see me race stress free and happy the entire way!)  The run course was an out and back that took place somewhat on a trail and somewhat on a running path.  It was a nice run but so darn hot!  Even though more than half of the course was shaded, it was brutal.  The heat was unbearble on the run.  I have never witnessed so many people walk in a race.  I made it a point to only walk through the water stops, which thankfully were at every mile.  Each stop had water, heed and kids with supersoaker guns.  The turnaround point had rags that had been soaked in ice water.  The supersoakers and rags were lifesavers!

To be honest, I did not feel that great on the run…I was definitely struggling but because I had been having such a great race I refused to let myself get down…I just kept pushing.  It went like this run-jog-trot-jog-run-trot-jog-water stop-walk-repeat.  I loved that while out there I was seeing so many teammates.  At one point I saw my friend Dee who is a super fast biker/runner.  She had started 25 minutes behind me in wave 11 and was coming up on me quick on the run…I really did not want her to pass me so I started hauling ass to the finish line.  After making it up Mount Everest the smallest hill ever, I rounded the corner with .2 to go in the race and knew I was going to crush my goal.  As I came into the finish shoot I could hear my teammates Ryan and Kristin yelling for me to sprint so I just kicked it into high gear and pushed.  And I won’t lie…I fist pumped all the way through the finish line.

I had told my mom that I should be by 1:50 but that my goal was 1:45.  Clearly I was BEYOND thrilled when I crossed that line.  My watch said (unofficial) 1:41:54 so I knew no matter what I smashed my goal time!  Official results came up and I was over the moon!  Almost 5 minutes faster than I had expected- and in that crazy heat nonetheless.  This was my first time racing the course,  but I still think of it as a PR.  My last race of similar distance (the bike was .5 less) was last year in Belmar and I did 3 minutes better in this race.

It goes without saying that I am on cloud 9…even still today.  I wish I could bottle that race experience up.  Once I made the decision to drop, I was completely calm.  I made a deal with myself to enjoy the race and just have fun.  I took the pressure off and did great!  I do not regret my decision for a second.  This was by far my favorite race to date.

The stats by numbers: 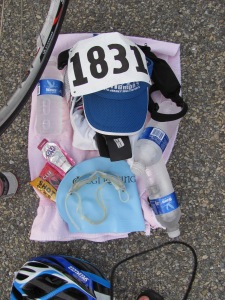 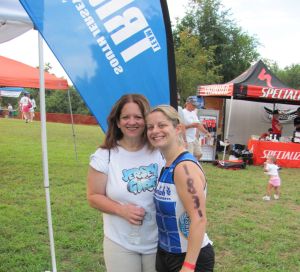 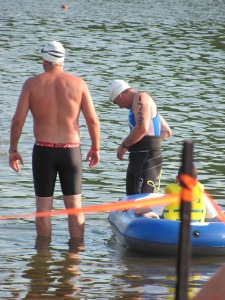 David and Blake gearing up for their swim! 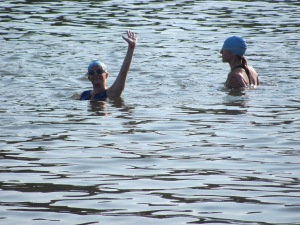 Out in the water, ready to go! 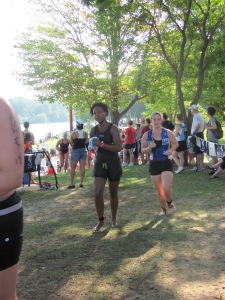 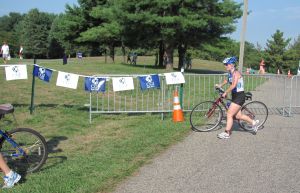 Heading out on the bike… 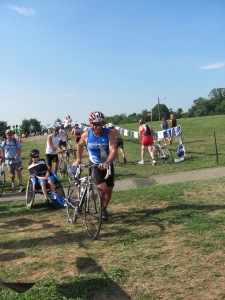 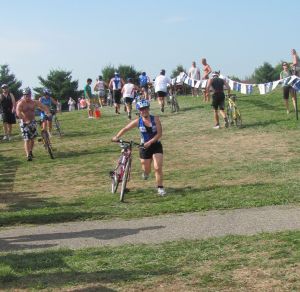 Down right elated with my bike time! 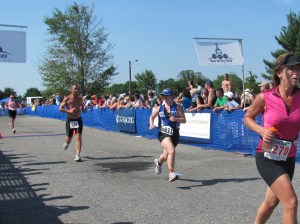 Sprinting into the finish! 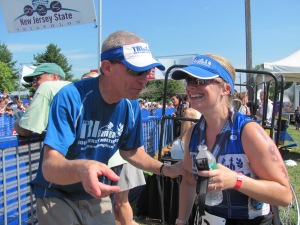 My favorite photo- pure joy on my face as my friend Brian congratulates me. 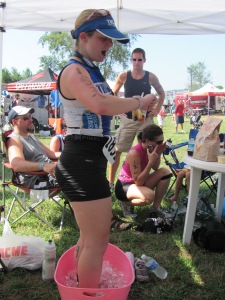 Timing myself in the ice bath 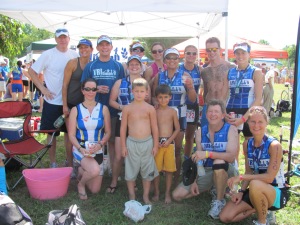 This was only a portion of the team’s racers.  Unfortunately we never got a full team photo.